“So basically, you’re saying that you want me to be just average like everybody else.”

That was the highlight funny quote from a conversation we had a few months ago with Sam about autism. The term autistmically was introduced to us, as in “If I watch too much t.v. I get all autismically.”

We don’t push these conversations on Sam often. We have tried in the past to bring up autism just to see what he thought about the word and if he knew what it meant. The first time Rob asked him about it Sam insisted that it wasn’t a real word and that Rob had made it up. Another time when he was asked if he knew what it meant he said it just means that some people think differently than others.

This conversation was special though. Sam sat down, looked Rob in the face and said, “Dad, I want to talk about my condition of autism.”

Man, I wish I had a button I could push and instantly record conversations that we sometimes have with him! Especially this one. It was at times hysterically funny and other moments were so incredibly heartbreaking I wanted to grab him and just hold him tight like I could when he was little.

My precious gangly boy with the dark fuzz growing over his top lip and the just beginning to change so he’s all over the scale voice, looked so fierce as he asked questions and shared some conclusions he had come to. That, in and of itself, is mind blowing. That he is becoming more and more able to communicate the end result of what he takes in and processes…you can’t imagine what that is like. Mind you we still have no real idea of how he is processing, and the conclusions he comes to are rarely what we expect, but the mere fact that we are able to see a little more clearly, to understand him a little more…oh, that is such a gift. A precious heartrending gift.

One of the greatest challenges, and at times a quite literal danger, with autism is the lack of self awareness. Autistic children can be extremely reckless because there is no understanding or concept of fear. There can be an oddly high tolerance for pain because the part of the brain that processes information about self doesn’t function normally. To be able to function appropriately within our communities we must be able to understand ourselves in relation to others. This can be difficult and awkward for all of us and it is even more so for the autistic child.

We’re all so new to this and the emotions swirl and twist in a dizzying kaleidoscope kind of way. I used the word fierce to describe him…the look on his face showing how eager he is to battle his way through. But then his voice cracked just a little and tears welled up as he asked, “But why me?”

And we don’t have an answer for him. We don’t know why God made him this way. Why God chose him to bear this particular heavy and burdensome gift. But He did make him with autism and He did give this gift that blesses us with a heavy precious joy.

This may surprise people and may even anger some but I don’t care about a cure. I’m not really interested in knowing a cause. My son isn’t broken and he’s not defective. He’s amazing and challenging and we’ll do everything we possibly can to help him be all of him that he was created to be. Don’t get me wrong, we’ll gluten free the heck out of his diet and a bunch of other stuff that we find helpful. But it’s not to fix Sam. It’s to help him relate and connect to the world around him as much as possible. It’s so that we can be a part of his world. 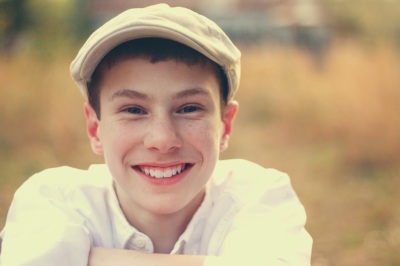 Staying true to form I’ll end each post with a Sam story. Recently, one of his sisters was in the shower when she realized that her face cleaner was on the bathroom counter and she yelled for Sam’s help. Sam, upon reading that it was for “blemishes and black heads” all but refused to hand it over. He reasoned that she had neither black hair no a black face and therefore she had no business cleaning her face with it.

10 thoughts on “Self Awareness ~ Sam’s World”