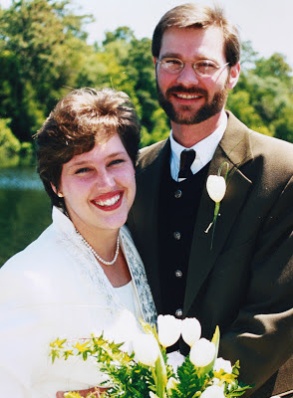 It was fourteen years ago today. Mid afternoon with no music except the sound of the birds and the song of a breeze blowing through tall pine trees. A small group of family and even smaller group of friends gathered at the edge of the lake.

Despite knowing it was the right thing…that he was the right one…I was as nervous as I had ever been in my life. He stood tall and straight beside my Dad, who would perform the ceremony, and his best man. Telling them he’d be right back, he strode up that small grassy hill, took my cold hands in his and said something like, “Let’s go get married.” My relief at being fetched worked its way out in a quick kiss on his cheek and together we walked back to the dock.

In that moment that which had been broken was healed. I felt like the last of the dirt and ash of past sin was rinsed away and I was clean…wanted, accepted, and redeemed.

Looking at one of only two pictures I have from that day makes me laugh. We had no idea what all was coming our way. A baby nine months and two days later to make our family of three a family of four. Swiftly followed by another nine months after that and a fourth eighteen months after that. And then of course the utter surprise almost five years later when another one would make our family complete. 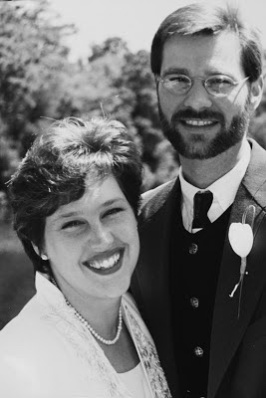 And my world, has that man ever turned my whole paradigm of life upside down! From a naive Baptist girl to a reformed, infant baptizing, communion taking every week, Psalm singing, liturgy loving woman. He’s grown me up and as difficult as I make it at times, he sanctifies me.

But I am ever so grateful and delighted to keep walking by his side to find out. 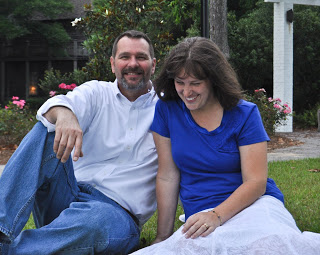 Looking at these family pictures reminds me how much the children have changed (not to mention how much longer my hair is now!) in the last two years…I think we may need to do that again 🙂